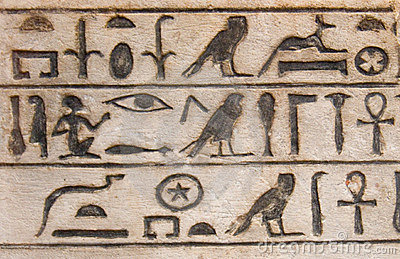 “Egyptian philology should never lose sight of the fact that her chief title to existence is as handmaid to the sovereign humanities of literature, history, and the study of the mind of man…In ideal conditions Egyptologists would be compelled to re-translate all their inscriptions and papyri as frequently as revised editions of the great European encyclopedias are now accustomed to appear.”

A brief history of the writting

Egyptian hieroglyphs were a formal writing system used by the ancient Egyptians that combined logographic and alphabetic elements. Egyptians used cursive hieroglyphs for religious literature on papyrus and wood. Less formal variations of the script, called hieratic and demotic, are technically not hieroglyphs.

The word “hieroglyph” comes from the Greek hieros (sacred) and glyphos (words or signs) and was first used by Clement of Alexandria (150 – 230 AD). The ancient Egyptians called them ‘mdju netjer or “words of the gods.” The first known example of hieroglyphic writing in ancient Egypt was discovered on bone and ivory tags, pottery vessels and clay seal impressions discovered in a pre-dynastic tomb in Abydos. The deposits are dated to between 3400 and 3200 B.C. The last example is from the temple of Philae, and is dated to 394 A.D.

Knowledge of the hieroglyphic script was lost until the early 19th century, when Jean-Francois Champollion (1790-1832) used the Rosetta Stone to decipher the script. If you are interested on the subject some good literature is How to Read Egyptian Hieroglyphs by Mark Collier, Bill Manley as well as Middle Egyptian by James P. Allen and Ancient Egyptian Hieroglyphs by Janice Kamrin. Another very good tutorial can be found on YouTube in EgypthologyLessons’s channel.

Visually hieroglyphs are all more or less figurative: they represent real or illusional elements, sometimes stylized and simplified, but all generally perfectly recognizable in form. However, the same sign can, according to context, be interpreted in diverse ways: as a phonogram (phonetic reading), as a logogram, or as an ideogram (semagram; “determinative”) (semantic reading). The determinative was not read as a phonetic constituent, but facilitated understanding by differentiating the word from its homophones.
The English Egyptologist, Sir Alan Gardiner, arranged the hieroglyphic signs of Ancient Egypt into a number of sections in order to aid categorisation. For each symbol is associated with a letter followed by several numbers such as A21, G12, the later indicating the category in the Gardiner sign list. There are 27 different categories such as Birds, Mammals, Man and his occupation and a total of 821 different symbols. You can find additional information about the symbols in each category on the Wikipedia Gardiner’s page.
Of course this sign list, though quite accurate, is actually hard to use in practice. Consider the word sky, encoded as Q1-X1-N1 would be very difficult to pronounce in any conversation about the meaning of a text. To help with this and to actually make a sound representation of the hieroglyphs transliteration is often used.

Transcription, sometimes also called transliteration, is an international convention between Egyptologists to represent the consonants of hieroglyphic writing as a single Latin character. The advantage of this is that the pronunciation of a word becomes more clear. The problem with using this system is the way Latin characters are pronounced between in different languages, for example the sound ‘x’ might be rendered in English as kh and in German as ch, whereas the French would take ch for S. Or if one were to transcribe the verb sDm, “to hear”, as sdjm, one might think that it consisted of 4 consonants instead of 3, which might make a difference in the conjugation of that verb.

The absence of vowels in hieroglyphic writing makes it impossible to know how the language of the Ancient Egyptians really sounded. Also, as Ancient Egyptians was a living language at some point in the past it evolved and changed. For example the transliteration of the name of the god Amun, dated to the 18th and 19th Dynasties, was Amaana, while the Greeks, some 500 years later, transcribed this name as Amoun.

In addition, as long as the language of the Ancient Egyptians  was a living language, it evolved and changed, just like any other living  language. This is clear from its grammar and it is certain that this evolution  also impacted the pronunciation of words. The cuneiform transcription of the  name of the god Amun, dated to the 18th and 19th Dynasties, was Amaana,  while the Greeks, some 500 years later, transcribed this name as Amoun. To cope with the fact that the Ancient Egyptian words are just represented by consonantal skeletons, Egyptologists have come to the following convention: A is read as a long a, i and j is read as ee in reed, a is read as a short a, w can be read as w or as oo in good and a mute e is placed between the consonants to make the words easier to pronounce.

The Egyptian writing system is complex but relatively straightforward. The signs are divided into 3 major categories, namely logograms, phonograms and determinatives.

A phonogram indicates one or more sounds (or syllables). Phonograms are uni-consonantal, bi-consonantal or tri-consonantal. The uni-consonontal signs (below) are commonly used in personal names, and they are about 24 in total. The Pharaohs names tended to be made up of more complex signs and often featured the name of a god, but during the Old Kingdom and Ptolemaic period the Pharaohs spelt their names phonetically using single consonant signs. Remember the old picture that is usually associated with Ancient Egypt, it’s just a nice description of what the symbol is transliterated to as a uni-consonantal sign (basically the pronunciation of the symbol):

An interesting characteristic of the writing system is what is called phonetic complements. Basically because the use of  ideograms and phonograms tend to be ambiguous especially with bi-consonantal or tri-consonantal symbols which could be read in different ways:

can be the biliteral rw or occasionally the uniliteral l.

To cope with this Egyptian writing is often redundant: words might follow several characters writing the same sounds, in order to guide the reader. For example, the word nfr, “beautiful, good, perfect”, was written with a unique trilateral which was read as nfr:

would be written as  nfr+f+r, but also read as nfr, by adding 2 uni-consonant symbols.

md +d +w (the complementary d is placed after the sign) → it reads mdw, meaning “tongue”.

ḫ +p +ḫpr +r +j (the 4 complementarity frame the trilateral sign of the scarab beetle) → it reads ḫpr.j, meaning the name “Khepri”, with the final glyph being the determinative for ‘ruler or god’.

nṯr with the vertical line near not bellow means “god” (the character in fact represents a temple flag).

The determinative has no phonetic value, and so is not transliterated. It indicates the end of the word and provides you with further information concerning the meaning of the word. The determinative sign can be vital for translation as there are no vowels in hieroglyphics, and so a set of consonants could have more than one meaning. For example the transliterated word iAw can mean “old” when the determinative of an old man is used, or the verb “to praise” when an image of a men raising it’s arms is used:

nfrw meaning “the beautiful young people” where w and the three strokes are the marks of the plural and the young boy is the determinative indicating babies and children.

also nfrw but here the meaning “foundations (of a house)” because of the determinative of the house symbol. Tripling the nfr character is used to express the plural, hence the ending w of the transliteration.

How to read hieroglyphs

A very interesting aspect of starting to decipher hieroglyphs is to know how to read them. Here we have just one important rule that apply:

Here are a few examples. Notice that the bird is looking left, so we should try to read as if we were in front of it, so from left to right.

Here the birds are looking right, so the horizontal order is inverted:

The Ancient Egyptian Cartouche hieroglyph-(as hieroglyph only) is used to represent the Egyptian language word for ‘name’. It is Gardiner sign listed no. V10, of the subgroup for rope, fibre, baskets, bags, etc.

The cartouche hieroglyph is used as a determinative for Egyptian language šn-(sh)n, for “circuit”, or “ring”.

Later it came to be used for rn, the word ‘name’ spelled as r with n, the mouth over the horizontal n

Besides the cartouche hieroglyph use for the word ‘name’, the cartouche in half-section, Gardiner no. V11, , has a separate meaning in the Egyptian language as a determinative for actions and nouns dealing with items: “to divide”, “to exclude”.

A cartouche was mainly used for the two last names of the sitting king. For example:

GlyphViewer application tries to improve identifying the hieroglyph symbols, as well as to help you translate the glyphs. As explained in the tutorial you can try to use the OCR engine to automatically identify the glyphs or manually add or correct them by clicking on a glyph in the image and them try to assign the correct symbol from the categories available for the language. You don’t need to know the transliteration of the symbol, nor the Gardiner’s symbol notation, GlyphViewer will assign them for you: The next step is to actually build a translation. All you need to do is to select a number of glyphs, previously assigned to symbols, then click Recognize. GlyphViewer will try to identify glyphs and assign them to symbols from the Gardiner’s sign list. For example, let’s take the following writting:

Notice the green glyphs that have been identified and assigned to the symbols: Q3, X1, N1 in Gardiner’s notation. The next step was to select them and click Translate. The word for sky, heaven was identified. Now build your translation, assigning the above word to it:

This is just a few things GlyphViewer application can do. If you are interested please download it from www.2glyph.com site.

In the next article we will talk about Ancient Hieroglyph grammar such as: nouns, adjectives, pronouns, prepositions. This will help you become a better Glypher!